Showing posts from April, 2013
Show All

April 30, 2013
As published on KirkukNow.com on 25-04-2013: Moments ago, the Kirkuk Now reporter in Hawija, Yassin Abdulrazaq Ahmad was freed with a number of other detainees, after they have been handed over to the Hawija police by the military. One of the family members of Yassin Abdulrazaq confirmed Yassin’s release along with the other detainees. Yassin Abdularazq Ahmad has been working for Kirkuk Now since its establishment, and he was arrested on April 20 by military forces before the attack on the demonstrator’s camp in Hawija on Tuesday, April 23. Apart from repetitive attempts by Kirkuk Now’s administration for freeing the reporter through concerned parties, Kirkuk Now published announcements saying “Yassin Abdulrazaq has been illegally arrested without the court’s order by forces of the 12th division of the Iraqi army, and the act was in violation of the human rights and global journalists’ regulations.”
Post a comment
Read more 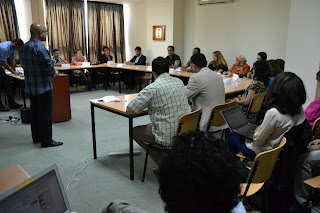 We kicked off of a special project today that runs across various countries in the Middle East: The Wireless Reporting Application project, Story Maker. The aim of Story Maker is to increase cooperation between civic reporters from the social media generation and the world of the traditional media. Story Maker is an application on a mobile phone, with this application people can make (news) stories and upload and spread them using a safe platform. The participants come from all over Iraq and form a mixed group with activists, civil journalists and journalists from traditional media. They gathered today in Erbil for the opening of this 5 day training. The idea for the Story Maker project came from Free Press Unlimited, also involved are Rising Voices and Hivos. The trainers are IMCK lead trainer Khaled Sulaiman and co-trainers Munaf and Amar. You can find more pictures of today's training on Facebook .
Post a comment
Read more 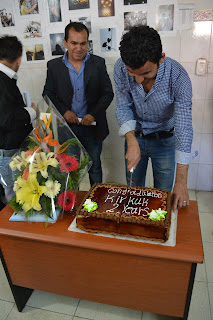 Today we celebrate the second birthday of KirkukNow.com; the independent news website from and for Kirkukis that has a special eye for human interest stories. The site was founded two years ago to provide all Kirkukis with un biased news about all people in the city, regardless their background, in 4 different languages. The site has grown to be a successful medium with a continuously growing number of readers and people who respond. We thank the KirkukNow staff for all their effort and input led by Editor-in-Chief Salam Omer. Hopefully there will be many birthdays to come, PIROZBET! More pictures of today's party can be found on Facebook .
Post a comment
Read more
More posts