Showing posts from November, 2011
Show All

November 22, 2011
Twelve documentary makers from Sulaymaniya and surroundings on November 22, 2011 attended a briefing with IMCK and Statt Consulting on illegal immigration. The meeting took place in the training hall of the mediacentre in Sulaymaniya. The TV makers were briefed on details about illegal immigration and its results. Documentaries by Kamaran Jamal about the subject were shown, and trainer and documentary maker Salar Sultan conducted a small workshop on how to write a scenario for a documentary.
Post a comment
Read more 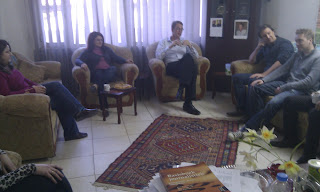 On Monday November 4, 2011 Dutch Ambassador to Iraq Jeroen Roodenburg visited the IMCK office in Sulaymaniyah. During this visit Ambassador Roodenburg was introduced to staff members of the IMCK and informed about the activities of the IMCK in Iraq and Iraqi Kurdistan.
Post a comment
Read more 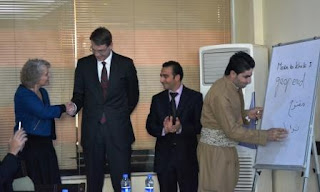 Media bo Khalk, the post graduate course  in journalism by IMCK was opened officially in Erbil, on Sunday November 13, 2011. The Dutch embassador Jeroen Roodenburg opened the course together with two former students of earlier editions of Media bo Khalk. Roodenburg made a comparison of diplomats and journalists and concluded that they both are curious, they report and they care about people. The difference is their public, as diplomats are reporting in confidentiality. The Assistent Director of the Department of Foreign Affairs of KRG, dr Didar Zebari, spoke of his support for IMCK in setting up an important training course for journalists like Media bo Khalk. As did former KRG minister Chnar Abdullah, who pointed to the importance of professional journalism for the development of Iraq. IMCK board member Rebin Rasul explained the importance of good education for starters in journalism, from his own experience when working for the Kurdish newspaper Hawlati.
Post a comment
Read more 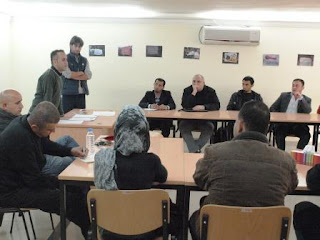 Students for the third edition of Media bo Khalk/Media for People/Al Ilam lil nas arrived in Erbil on Saturday November  12. The first group of students from Baghdad, Basra, Kirkuk etc were briefed by project manager Saman Penjwini and the trainers Khaled Sulaiman (lead trainer), Ako Mohammed (print) and Aram Saeed. The formal opening of the post graduate course will take place on Sunday November 13, 2011 at the Safeer Hotel in Erbil.
Post a comment
Read more

November 02, 2011
Iraqi Treasures is on line! The website publishes the best stories of the Natural Resources workshops, that IMCK organises with Mesalla and Kirkuk Journalists Group.The project is funded by Norwegian People's Aid. On line now are the main stories out of the first workshop (October 2011 in Erbil) on Oil, Gas and Water. After the workshops in December (2011) and March (2012) more stories will be published. The website are in Arabic (with a special corner for stories in Kurdish). The information from the stories can be used (mentioning the source) by colleagues in Iraq publishing on the subject.
1 comment
Read more 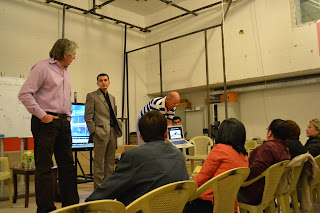 International trainers Felix Meurders and Henk ten Oever started a 2 day on the job training at Gali Kurdistan. The training, which started on November 2, 2011, focusses on interview and presentation skills. Meurders is a veteran of Dutch television and has presented several programs on national Dutch television and ten Oever is a Dutch media specialist. In total, there were 20 people taking part in the training.
Post a comment
Read more
More posts