Showing posts from July, 2008
Show All 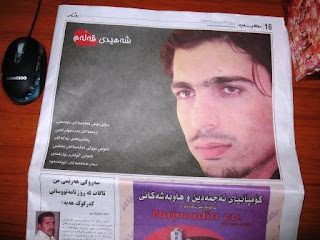 Speech by Judit Neurink, director of IMCK, after the death of Lveen-journalist Soran Mama Hama, in July 2008 Monday my good friend Yahya Basindji of Avene and AP was wounded when he was beaten up by a mob after a bombblast in Kirkuk. Last week my former student Soran Mama Hama of Lveen was assasinated in Kirkuk. Being a journalist in Iraq is a dangerous profession, we all know. And that is because so many people do not realize how important press freedom is for a nation. Without press freedom, no democracy. Those two are linked tightly. Because in a democracy, the media check on politicians and their actions, give civilians a voice and show what is happening in society. How long will we have to wait until Iraq is a democracy, and authorities will understand that they have to protect journalists, in stead of threatening them? That by letting these things happen, they do not show strength, but weakness, even fear? Fear for a press that is doing what it should be doing… Look at the
Post a comment
Read more
More posts