Showing posts from July, 2012
Show All

More women in the media (week 3) 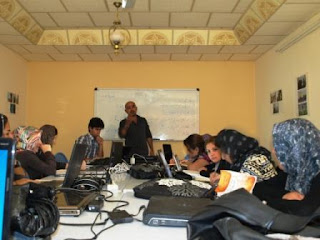 The workshop for women starters in journalism of IMCK went into its third week. The young female participants returned on Saturday July 28, 2012 to the IMCK traininghall in Sulaymaniya to learn more about working for print media, with IMCK-trainers Khaled Sulaiman and Ako Mohammed. The course will focus this week on how to write different kinds of articles and how to make a (news)paper. At the end of the week a paper will be produced with their work. The course is made possible through funding from the German Consulate in Erbil and the Iraqi First Lady, Hero (Khan) Ibrahim. More photo's of the course on IMCK's Facebook page .
Post a comment
Read more 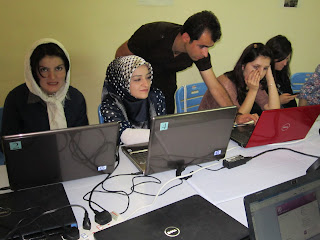 July 15, IMCK started its second week in the training of Kurdish female graduates in the basics of civil and professional journalism. Fifteen participants attend the second week that focuses on how to use Internet and social media in a professional way. Also attention to the use of infographics will be given. Khaled Suleiman and Internet-expert Sardasht Aziz are the trainers during this workshop. Last week the participants got an introduction to the basics of journalism and what news is. Media in Iraqi Kurdistan need more female journalists. They are needed to make the media more interesting for the big target group of women that are hardly reached now. Even though women make up the majority of all Iraqi's, they are hardly to be seen in the media. The training will last for six weeks with a focus on different subjects. The training started with a week on news and basic journalism, and will be followed by a week on print-journalism, two weeks for TV-journalism, a week t
Post a comment
Read more 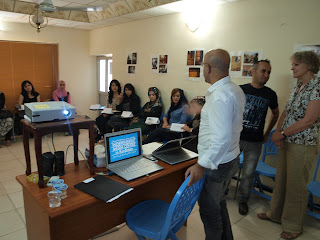 July 8, IMCK opened a starters' course in journalism for fifteen Kurdish female journalists in Sulaymaniya. IMCK wants to teach young, female Kurdish graduates the basics of civil and professional journalism in a post graduate training specially organized for them. Media in Iraqi Kurdistan need more female journalists. They are needed to make the media more interesting for the big target group of women that are hardly reached now. Even though women make up the majority of all Iraqi's, they are hardly to be seen in the media. News is mainly about politics, and if not, about subjects that are of interest to men. Women news in Iraq is often news about honour killings, violence against the family, the plight of widows - or perhaps about a famous singer. The fact that women play also a professional role hardly gets any attention. That political decisions also have effects for women, is neglected. Stories about business women or the career chances of young women are not found
Post a comment
Read more
More posts