Showing posts from August, 2011
Show All

Prize for reporting on illegal immigration 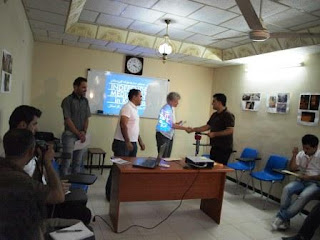 Aso Amin of Chawyxelik website won the first prize (500 dollars) in the contest of IMCK and Statt Consulting for stories in Kurdish media on illegal immigration. His story about a man who returned after a failed migration to Kurdistan, who choose the hardship of living in a far off region, showed the different aspects of the problem, the jury of the Prize thought. Aso used the example of the returnee to show the bigger story of illegal immigration. The prize was handed to him by IMCK director Judit Neurink during a little ceremony at the IMCK office , on Sunday August 28, a date chozen because of the proxility of the Eid holiday. The jury was made up of IMCK trainers and journalists Khidher Domle and Salaam Ibrahim, and Hazhar Taha for Statt Consulting. There were also two second prizes (of 250 dollars each) which went to Sara Qadir of Awene newspaper for a story about the effects on women who stay behind when men leave to go abroad, and to Bahez Osman of NRT TV (picture below),
Post a comment
Read more

On the job at Bas newspaper 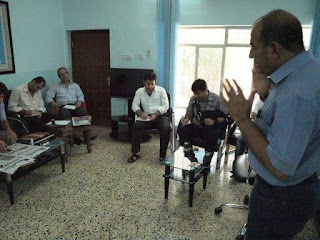 IMCK trainers Khidher Domle and Ako Mohammed started on August 2, 2011 on a 3 day, on the job training at the offices of Bas newspaper in Erbil. Bas is a small newspaper published in Kurdish and Arabic, focusing on business news and reporting. The training will focus on news, leads and headlines, design, target groups and reporting for the reader.
1 comment
Read more 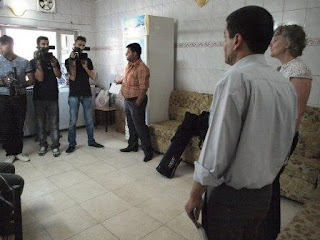 At the IMCK offices three Kurdish journalists were awarded a prize for best stories on oil related issues. The Oil is Money Prize was the finale of the project IMCK did with Open Society Intitute to improve the knowledge of Kurdish journalists (and thus of Kurdish readers/viewers) on the subject. After the Oil workshop IMCK offered in March 2011, the participants were invited to keep posted on a special Facebook page, and to meet two times with trainer Ben Lando (of Iraqi Oil Report) and some experts. All participants were invited to send in stories for the Prize. The jury consisted of Asos Hardi (director of Awene Newspaper), Khaled Sulaiman (Editor in Chief of Haftana magazine), Ben Lando (Iraqi Oil Report) and Judit Neurink (director IMCK). They choose the three best stories out of a dozen that were sent in. The prize ceremony took place on July 31, 2011. The winner is Aran Sidia from Hawler Newspaper, with a story about the results of oil production for the environment. Se
Post a comment
Read more
More posts